“I would identify myself as the exception to the rule, I am not the common denominator”, says Councilor Kristyn Wong-Tam, representative of the Ward 27 electoral district. Being the first openly out lesbian in the Toronto City Council, it is no wonder that she is quick to describe herself as a uniquely distinct, yet underrepresented stripe within the municipal, provincial, and federal political landscape in Canada. This underrepresentation, in many ways, pales against, and in other ways, contradicts, the diversity that exists in the city of Toronto. Councilor Wong-Tam, herself, describes the city as possessing a “cacophony of sounds and visuals”, one that compliments the “real diverse dynamism” of the city.

“For a whole host of reasons, I am aware that I have intersecting identity”, says Councilor Wong-Tam. This is unsurprising seeing as she is a lesbian woman of colour, an intersectional identity that leaves her occupying three different and overlapping spaces for minority identities within society. This intersecting identity exists against the backdrop of a society that, as has been described above, is structurally disposed to disproportionately disfavor these said identities. But, being an activist, Councilor Wong-Tam refuses to let the structural disposition of society hinder her success. She has succeeded within the corporate and public professions that she has occupied within society. She has refused to be dissuaded by these structures, because, according to her, she is “internally optimistic”. “I believe that the glass is always half full, and I think that because, I keep filling it”. In this way, she fights for her space within society, while simultaneously trying to, as an activist, construct and shape the society that she wants to live in, one where the ideals of equality and humanism are respected and represented.

She especially believes that this need to advance the visibility of the LGBTQ community in Canada is very weighty on prospective and current public officials. “Anyone of us who seeks political office as an LGBT person, you are not exempted, it is your duty to come out”, says Councilor Wong-Tam. According to the councilor, it “does a disservice to everyone of us who are on the front line”, fighting for equality, when public officials remain in the closet, instead of coming out, joining the front lines, and enhancing the visibility of their community. “If we are going to share in the rewards then we must also share in the burdens”, says the councilor. Public officials ought not to, both profit from the prolific successes achieved by the LGBT community’s activists, whilst cowardly remaining in the closet, instead of standing in solidarity with the community.

Councilor Wong-Tam is very passionate about creating a society, where LGBTQ youths feel safe within the confines of its structure. “I don’t think that the responsibility to break down barriers should be borne exclusively on the shoulders of LGBTQ youths. That is grossly unfair. It is about making sure that systematically and institutionally, we are breaking down those barriers”. She is better able to understand the plights that LGBT youths face because she came out at the very young age of sixteen. When she came out of the closet at sixteen, she temporarily lost the support of her parents who were trying to grapple with her identity as a lesbian.

“I probably did not have all the life skills that I needed to survive as a teenager, in a very adult world”, says Councilor Wong-Tam, contemplatively. “Some of the biggest challenges that I faced as a young person, on my own, with no parental support was around housing”, she says, “and it was around how to feed myself, where do I get money to pay the rent, and how do I make sure that I can actually finish high school”. She recognizes just how tough it is for LGBT youths, especially those youths who do not have the support of their parents. “I could have done things differently and made some different choices”, Councilor Wong-Tam says, in a regretful, yet content tone. 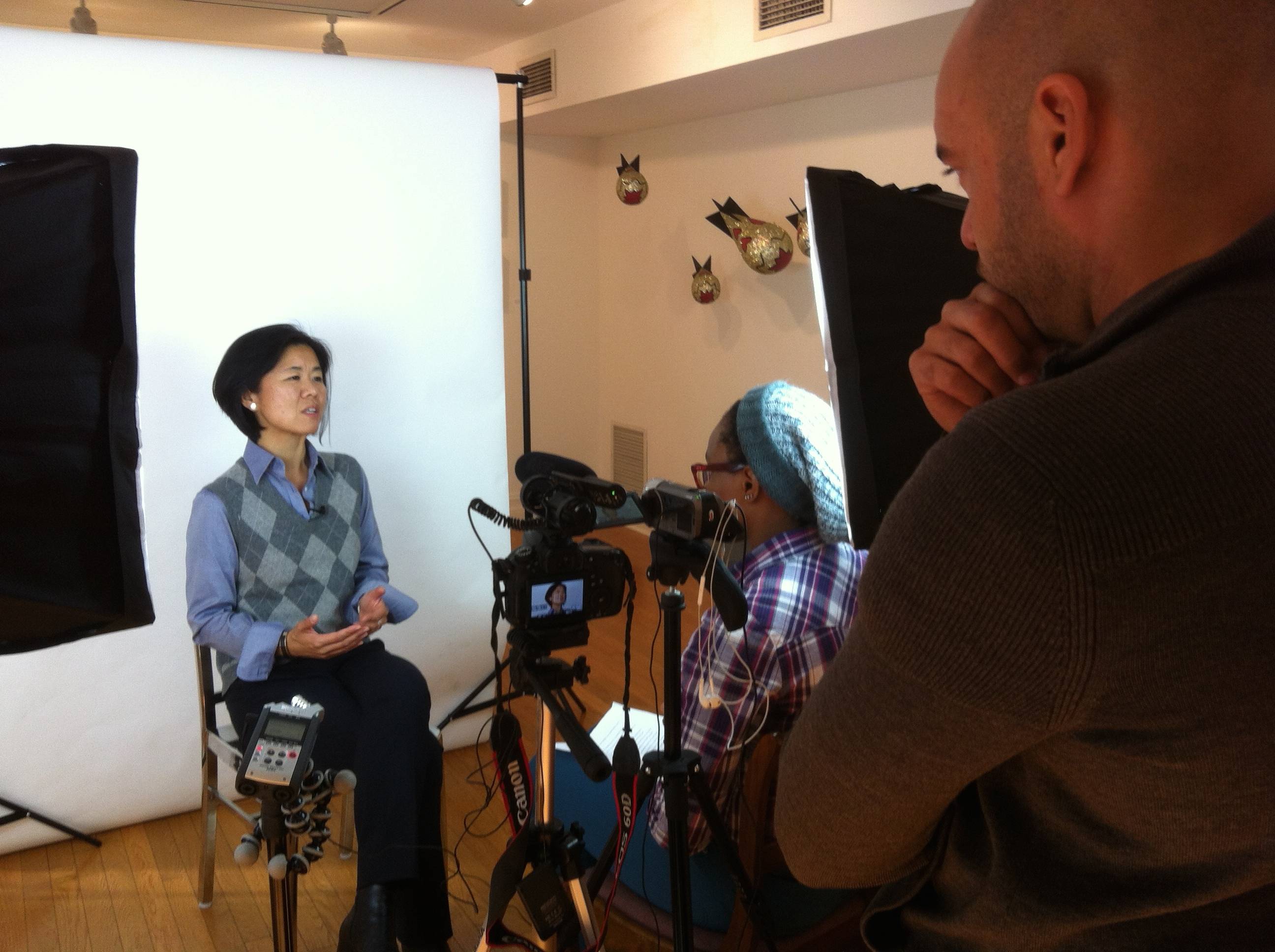 “I can tell you that there are a number of LGBTQ youths that I came out of the closet with that are no longer with us”, a visibly teary and shaken Kristyn says, “they are dead”. “They have committed suicide because of depression, because their family refused to accept them. They contracted diseases and their bodies could not fight it off and they passed away. I have friends who have overdosed on drugs because they were coping with the challenges that I have coped with. Some of us made it out of that dark space and some of us didn’t. So, when I think back to the friends that I have lost, and when I think back to what could have changed in our journeys, as young people, coming to adulthood, coming into our own voices, having adults to show us that there is another world, that there is another way would have made the difference in the lives of several of my friends”. It is because of this that Councilor Wong-Tam understands that society, as a whole, must help LGBT youths with the struggles that they face and the barriers that obstruct their path to living a fundamentally humane life.

Her passion to help LGBT youths with the struggles that they face, led her to sponsor The Spirit Of Will Munro Award. This award is a way to honor LGBT youths in Ontario that are actively involved in community art projects, and who use their respective art projects to help shape their community, and society at large. “I really like the idea of using art as a catalyst for change”, says Councilor Wong-Tam. “I think it is very important to place art and culture in a prominent space and give it relevance in our lives. It is an incredible unifier of people from different backgrounds. Art has the power to transform not just individual lives, but entire communities”.

It is her belief in the transformative power of art and its power to engage people conversationally in a powerful dialogue of self-expression and social change that led her to sponsor this award. She wanted to give LGBT youths the opportunity to empower themselves through art because she believes that LGBT youths are constantly “looking for opportunities of expression, they are looking for people to listen to their stories and they need to see their stories reflected to one another”. She wanted to give LGBT youths the opportunity to experience the power of art, its ability to break down social barriers within society, and to encourage them to use art as a means to creating safe spaces within society, while simultaneously ensuring that they have social and communal visibility.

"For to be free is not merely to cast off one's chains, but to live in a way that respects and enhances the freedom of others", says Nelson Mandela. This was a philosophy that he propounded, fought for, and sacrificed a lot for. In many ways, Councilor Wong-Tam shares in this philosophy. “I don’t believe that true success is measured individually, I think an accurate reflection and measure of success is done collectively”, says Councilor Wong-Tam. She believes that sporadic instances of success are important, but ultimately insufficient in the battle for freedom and equality.

According to Councilor Wong-Tam, the most accurate way of measuring the success of the LGBT community, is not simply by looking individually, at politicians, such as herself, who have been able to get elected, or nationally, in the various victories that the LGBT community, in Canada, has achieved. Rather, she believes that one must also look internationally to the tribulations and successes of the global LGBT community, in order to truly understand how far the LGBT community has come. It is “important to take a holistic view” when measuring success, says the councilor. In this way, she creates, or more aptly, recognizes, another intersecting identity that sprouts from within, by binding herself and her struggles to the international LGBT community.

Woman, Lesbian, Activist, Entrepreneur, Humanist, Co-founder of the Asian Canadians for Equal Marriage, Former President of the Chinese Canadian National Council’s Toronto Chapter, these are just a few of the identities that Councilor Wong-Tam struggles to balance internally, ones that intersect in uniquely beautiful ways to create the incredibly strong and resilient person and politician that she is today. Councilor Wong-Tam embodies and is defined by, at least thematically, her distinctly fractured and intersecting identities that merge, in such an amazingly unified way. The fluidity of her intersecting identities allow her to, simultaneously, live between, within, and at the edge of the elusive lines drawn by her intersecting identities, whilst managing a clash of her identities, as she strives for a need for order, borne out of an intensely chaotic life. She is willing to push, break, and change existing political and social orders and boundaries, in order to ensure that everyone has access to the fundamental ideals of freedom, equality, and liberty, in a deeply expressive way.

The intersectionality of her identities continues to personify the magnificence and intricate exquisiteness of the beauty and variety that is represented within the continuum of humanity. Councilor Wong-Tam is, and continues to be, one of the paradigmatic examples of the resilience of the youthful spirit, and the perfection that would ultimately emerge, if and when the Canadian and global political landscape gives visibility to the diversity that lies at the core of humanity, and amalgamates the intersecting identities that forms the essence, and is the spirit, of our society.

For more information on the SPOTLIGHT! program, please visit www.proudpolitics.org/spotlight