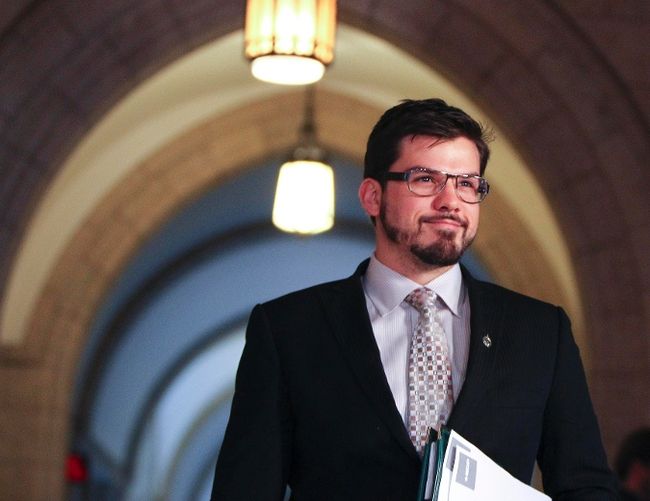 Dany Morin, NDP MP for the Quebec riding of Chicoutimi – Le Fjord, says “Every LGBT politician – whether on the municipal, provincial, or federal level – asks themselves one question: Will my sexual orientation hinder my chances of being elected?”

But Morin does not want the next generation of young LGBT leaders to be faced with such a question. As a young MP himself, Morin has taken the lead in forming a new program aimed at helping politically-inclined LGBT youth get past the fears of how sexuality could hinder their campaigns for public office. Morin and other out MPs from across party boundaries will be participating in the second annual Rainbow Day on the Hill (Journée Arc-en-ciel sur la colline) on April 16, 2013.

“The students are able to see first-hand what it is like to be an LGBT politician and what our day is like. A lot of them notice that it is just a regular job and not everything we do is gay-related,” Morin noted. “As the associate LGBT critic for my party, for instance, I spend part of my week on the LGBT portfolio, but it’s not all we’re about.”

That up-close and personal experience is exactly what Morin wants the participants to take away with them at the end of the day – to realize that it’s not only okay to be gay, it’s also okay to be out and run for public office.

Rainbow Day on the Hill was inspired by a program called Women on the Hill that matches up aspiring female youth with women MPs. “The Women on the Hill program is meant to provide positive role models for young women, for as we know there are not enough female politicians in the parliament. When I saw this initiative, I thought it was fantastic and that we should come up with a similar day for LGBT youth.”

That was in the fall of 2011. By the spring of 2012, Rainbow Day on the Hill was welcoming its first group of students to the halls of Parliament. Working with Jer’s Vision, the force behind the anti-bullying Day of Pink, Morin and four other out members of parliament inaugurated the first class of Rainbow Day youth.

The main achievement Morin hopes for the program is that it will be able to provide positive LGBT role-models for young people who desire to serve in public office but are fearful of the impact that being out could have on them. He spoke of his own role models and the importance they played in helping him to have the confidence to seek election.

“I remember as a teenager and I wanted to go into politics…I had a lot of doubts. At that time, I was not yet comfortable with my sexual orientation, but I saw other people like Svend Robinson, Libby Davies, and Scott Brison who were elected and came out during their mandate. And even though they came out, they managed to get re-elected and re-elected again. Sometimes you wonder about closed-minded people out their in your community, but I looked at these role models and said to myself that if they can be out and be elected, then maybe I can.”

Now some of those same role models are Morin’s colleagues in the House of Commons and are participants in the Rainbow Day program.

However, there is another goal in mind for the program. Morin not only wants to make running for office less daunting for LGBT youth, he also hopes to make it easier for those already elected to come out of the closet, no matter what political party they are in. He said this is one of the key reasons the program has been non-partisan from its start.

“I also want to give LGBT MPs who are not out something to think about. There are not yet a lot of out politicians in Canada. Some are perhaps open to family or in their local environment, but not on the national media scene. I would love it if next year we could have new MPs participating. We would welcome them with open arms. I do not believe in outing people, but hopefully we can open the door for them to participate.” The message he hopes to send is that the House of Commons, and every public office in Canada, should be a friendly place for LGBT members.

When asked what advice he would give to LGBT people who have an interest in elected office,Morin responded with a single focus: “Honesty.”

He emphasized the importance of trust between leaders and their constituents. “It’s about honesty. There is nothing to be ashamed of being LGBT. It is not about publicizing your private life, but about letting constituents know who you are.”

Continuing, he said that “Being an LGBT politician in our country doesn’t have to be a big deal. It can appear that way if you are in the closet or not out to your constituents, but just be honest. I sell my vision of the country and that is what my constituents come to know me for.”

Curtis Atkins is the Deputy Executive Director for ProudPolitics, Canada’s only multi-partisan LGBT organization aimed at diversifying the face and voice of Canada’s politics by helping emergent openly LGBT leaders realize their potential to serve and win elections to all levels of government through candidate support, fundraising, networking, and outreach.