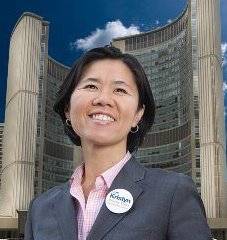 Earlier this week, Toronto City Councillor Kristyn Wong-Tam disclosed what she says is just the latest in a long line of homophobic and racist hate mail she has received since being elected in 2010.

In a letter titled “Let’s Kick the Faggots Out of City Hall,” an anonymous writer attacked the councillor with hate-filled language and expressed the wish that she would “get AIDS and die in public office.”

ProudPolitics wholeheartedly condemns this attack.  Hateful language and name-calling are the tactics of ignorance and cowardice.

Though addressed to Councillor Wong-Tam, the letter represents an attack on LGBTQ people in general.  It is a demonstration of both the challenges encountered by LGBTQ politicians and the work still to be done to combat homophobia.  It speaks to the need to develop more confident and effective leaders, like Councillor Wong-Tam.  That is part of our mission at ProudPolitics.

Although the letter was signed, “I support Ford Nation,” there is no indication that either current Mayor Rob Ford or mayoral candidate Doug Ford had any involvement with the incident.  However, the attack occurs against a backdrop of homophobic innuendo that has characterized municipal politics in Toronto recently.   Disputes around issues such as funding for Toronto Pride or whether politicians would march in the annual pride parade have been at the forefront of recent debates.

All politicians – whatever their orientation or ideological persuasion – have a responsibility to condemn attacks such as the letter aimed at Councillor Wong-Tam.  They also have a duty to make sure their campaigns or actions do nothing that encourages or relies upon homophobic, racist, or sexist ways of thinking.

Let’s tone down the rhetoric.