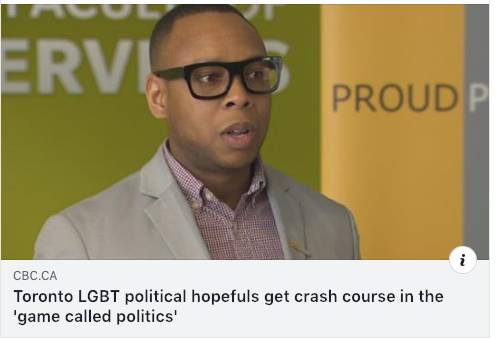 Lucas Power, Senior Writer, CBC News (February 10, 2018) - As Toronto's municipal election draws nearer, LGBT residents looking to run for office met on Saturday to get a crash-education in the rough and tumble world of political campaigns and life in the public eye. 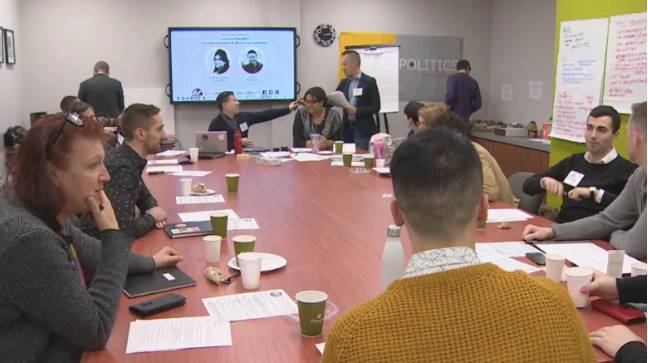 "Running for office is already a difficult process — there are lots of barriers — but for members of the LGBTQ community, there are even more barriers, especially for new candidates," said Chris Cowperthwaite, executive director of the Open Democracy Project and the son of Ontario Premier Kathleen Wynne.

The not for profit organization provides assistance to would-be politicians in an effort to diversify local councils and school boards so that they accurately mirror the communities that they represent.

The group produces something called a DemocracyKit, essentially a resource that political rookies can use to better understand the kinds of challenges that candidates face, such as fundraising and organizing.

Cowperthwaite points out that minority groups often face steep barriers and ingrained prejudices. That's why the Open Democracy Project is participating in an event run by ProudPolitics — a national group that provides a "venue" for LGBT Canadians running for public office — called Out to Win.

Out to Win gives politically curious people in Toronto an opportunity to learn more about what running entails.

Chris Cowperthwaite said a key part of campaigning for LGBT candidates is learning to deal with personal questions that may be asked by voters while staying focused on a political platform. (CBC)
The event is the kind of offering that is "absolutely essential for our democracy," Cowperthwaite said.

"Running for office is a very public and a very personal thing. And so, by definition, your personal life and your family life is going to get brought in," he explained.

"Members of the LGBTQ community face extra challenges because they may have to explain an alternative family dynamic, they have to put themselves out there in a way that other candidates who are not of the community, may not need to. There are extra questions they may need to answer."

That's exactly the kind of issues that those who gathered at Ryerson University on Saturday tackled.

"This session helps people walk through that experience," said Chris Matthews, co-executive director of ProudPolitics. Matthews compared launching a political campaign as an LGBT person to coming out for a second time.

Chris Matthews said deciding to run for public office is a little bit like coming out for a second time, on an even bigger stage. (CBC)
"For example, you're LGBT — you're out to your family but you're not out to the public ... But now you're running for public office, your life is more transparent. So coming out and having those conversations once again and understanding how that impacts not just yourself, but your whole family."

'You need a campaign team and money'
This was the second time ProudPolitics has offered candidate and campaign training. It is based on a model developed by the U.S.-based Victory Fund, a bi-partisan political action group committed to boosting the number of openly LGBT people in public office.

"There was no real support here or any organization that was providing those details" here in Canada, Matthews said. "How do we diversify public office? And how do we provide those people with the tools and resources that they need?"

It's a challenge that prominent transgender activist Susan Gapka knows all too well. Gapka has run unsuccessfully for public office several times, including for Toronto city council in 2006 and 2010, as well as for both the provincial and federal NDP candidacy in Toronto Centre.

"A lot of times it's really challenging. There's homophobia, transphobia and biphobia in politics," she said. The most difficult thing of all, she says, is "building a base of people who potentially see you as being able to win an election.

Susan Gapka said she has faced many challenges convincing others that she's electable as a transgender candidate. (CBC)
"Because you need a campaign team and money ... the people with the big money and the political machines are usually successful."

The ultimate value in events like Out to Win, Gapka told CBC Toronto, is that LGBT people "come together as community and realize that even though sometimes we have partisan differences, we have that common bond.

"That's a really positive thing — to know that you're not alone in this really overwhelming and challenging game called politics."

Toronto will vote for mayor, city council and school board trustees on October 22.